Effects of intensive blood pressure lowering on the progression of chronic kidney disease: a systematic review and meta-analysis

Methods: We performed a systematic review and meta-analysis of all relevant reports published between 1950 and July 2011 identified in a search of MEDLINE, Embase and the Cochrane Library. We included randomized trials that assigned patients with chronic kidney disease to different target blood pressure levels and reported kidney failure or cardiovascular events. Two reviewers independently identified relevant articles and extracted data.

Results: We identified 11 trials providing information on 9287 patients with chronic kidney disease and 1264 kidney failure events (defined as either a composite of doubling of serum creatinine level and 50% decline in glomerular filtration rate, or end-stage kidney disease). Compared with standard regimens, a more intensive blood pressure–lowering strategy reduced the risk of the composite outcome (hazard ratio [HR] 0.82, 95% confidence interval [CI] 0.68–0.98) and end-stage kidney disease (HR 0.79, 95% CI 0.67–0.93). Subgroup analysis showed effect modification by baseline proteinuria (p = 0.006) and markers of trial quality. Intensive blood pressure lowering reduced the risk of kidney failure (HR 0.73, 95% CI 0.62–0.86), but not in patients without proteinuria at baseline (HR 1.12, 95% CI 0.67–1.87). There was no clear effect on the risk of cardiovascular events or death.

Interpretation: Intensive blood pressure lowering appears to provide protection against kidney failure events in patients with chronic kidney disease, particularly among those with proteinuria. More data are required to determine the effects of such a strategy among patients without proteinuria.

Chronic kidney disease is a major public health problem worldwide, affecting 10%–15% of the adult population.1 Blood pressure–lowering agents are the mainstay of management strategies aiming to slow the progression of chronic kidney disease, as well as a core aspect of strategies aiming to reduce cardiovascular risk.2–4 Observational studies have shown a log-linear increase in the risk of kidney failure with high blood pressure levels across the observed range,5–7 suggesting that further lowering blood pressure could reduce the risk of kidney failure at most blood pressure levels. Current guidelines recommend a blood pressure target below 130/80 mm Hg for patients with chronic kidney disease,8–10 but this recommendation is mostly based on observational studies and a single randomized trial (the Modification of Diet in Renal Disease [MDRD] study) that focused on kidney protection.11 Subsequent trials of different targets in people with chronic kidney disease have yielded inconsistent results,12,13,14 leading to criticism by the recent Canadian Hypertension Education Program guideline (which suggested a less aggressive target) of other guidelines, with suggestions that their blood pressure recommendations went beyond the available evidence. This criticism has been supported by a recent systematic review (no meta-analysis was performed) that focused on 3 trials and reported inconclusive results overall but raised the possibility that proteinuria was an effect modifier.15 The final result has been clinician uncertainty about optimal blood pressure levels in patients with chronic kidney disease.

We sought to synthesize the results of all available trials that evaluated the effects of different blood pressure targets in people with chronic kidney disease and to better define the balance of risks and benefits associated with different intensities of blood pressure lowering in this population.

We performed a systematic review using the approach recommended in the PRISMA (Preferred Reporting Items for Systematic Reviews and Meta-Analyses) statement.16 We identified relevant studies by searching MEDLINE via Ovid (from inception through July 2011), Embase (from inception through July 2011) and the Cochrane Library database (Cochrane Central Register of Controlled Trials, no date restriction) for relevant text and medical subject headings that included all spellings of “antihypertensive agents,” “target blood pressure,” “intensive blood pressure treatment,” “strict blood pressure treatment” and “tight blood pressure control” (Appendix 1, available at www.cmaj.ca/lookup/suppl/doi:10.1503/cmaj.121468/-/DC1). We limited our search to randomized controlled trials (RCTs) with at least 6 months’ follow-up, but without age or language restrictions. We manually scanned reference lists from identified trials and review articles to identify any other relevant studies. In addition, we searched the ClinicalTrials.gov website for randomized trials that were registered as completed but not yet published.

The literature search, data extraction and quality assessment were done independently by 2 authors using a standardized approach (JL and PE). All completed RCTs that compared more-versus less-intensive blood pressure targets using pharmacologic blood pressure–lowering agents were eligible for inclusion. Data were extracted either from studies solely involving people with chronic kidney disease or from subsets of other trials where data on patients with chronic kidney disease could be obtained. Chronic kidney disease was determined using the definition developed by the Kidney Disease Outcomes Quality Initiative.8

We obtained published reports for each trial and extracted standard information to a spreadsheet. The data we sought included baseline patient characteristics (age, sex, systolic and diastolic blood pressure, history of diabetes, history of hypertension and chronic kidney disease), blood pressure targets in each arm of the study, types of blood pressure–lowering agents used, length of follow-up, change in systolic and diastolic blood pressure during the trial, outcome events and adverse events. We assessed the risk of bias using the approach recommended by the Cochrane Collaboration (assessing allocation concealment; blinding of patients, investigators and outcome assessors; completeness; intention-to-treat analysis). For 2 studies, we requested additional information from the original authors by written correspondence, which we included in our analysis.12,14 Any differences in data extraction were resolved by discussion among the authors and, where required, adjudication by a third reviewer (VP).

Our primary outcome was a composite of 50% decline in glomerular filtration rate and doubling of the serum creatinine level, or end-stage kidney disease. We also collected data on major cardiovascular events (i.e., fatal and nonfatal myocardial infarction, fatal and nonfatal stroke) and all-cause mortality, where available.

We calculated individual study hazard ratios (HRs) with 95% confidence intervals (CIs)13,14,17,18 (we extracted relative risks [RRs] when HRs were not available) for each outcome before pooling. For the continuous measurement of blood pressure, we used the mean difference between groups. We obtained summary estimates using a random effects DerSimonian–Laird model. We looked for evidence of heterogeneity in treatment effect between patients with and without baseline proteinuria by comparing summary results obtained from relevant subgroups (protein–creatinine ratio > 0.22 or daily protein excretion > 300 mg) in a prespecified subanalysis. We estimated the percentage of variability across studies attributable to heterogeneity beyond chance using the I2 statistic.19 We made graphic representations of potential publication bias using Begg funnel plots of the natural logarithm of the HR versus its standard error and assessed them visually.20 A 2-sided p value less than 0.05 was considered statistically significant.

Our literature search returned 2524 results yielding 1650 potentially relevant articles. Of these articles, we reviewed the full text of 67 reports, from which we identified 12 publications relating to 11 relevant RCTs (Figure 1). These trials involved a total of 9287 participants with chronic kidney disease (Table 1).13,14,17,18,21–28 Because kidney failure typically develops slowly over time, we included the long-term post-trial follow-up data from the African American Study of Kidney Disease and Hypertension (AASK; 8.8–12.2-yr follow-up)13 and MDRD trials (16.7-yr follow-up), although the blood pressure differences between the 2 arms were not significant during the cohort phase in these 2 studies. The reported trial quality varied substantially. All of the trials used open designs, although patients were blinded in 2 trials. Four of the 11 trials did not describe allocation concealment,17,18,21,28 and another 3 did not describe whether the analysis was done by intention-to-treat23–25 (Appendix 2, available at www.cmaj.ca/lookup/suppl/doi:10.1503/cmaj.121468/-/DC1)

Identification of relevant studies for inclusion in the meta-analysis. RCT = randomized controlled trial. *Included studies were published in 12 articles.

Characteristics of the studies included in the meta-analysis

Subgroup analysis of the effect of intensive blood pressure lowering on kidney failure in patients with proteinuria compared with those without proteinuria. CI = confidence interval, HR = hazard ratio.

Two trials reported data on severe adverse events (177 events in 723 participants), and no effect on the risk of such events was seen with intensive blood pressure lowering (RR 1.04, 95% CI 0.60–1.78).14,18 Three trials reported the risk of hypotension or associated symptoms.17,18,26 Individual trials reported that more intensive blood pressure lowering did not increase the risk of hypotension; however, the data were not suitable for meta-analysis. The risk of acute kidney injury was not reported. Finally, there was no clear difference detected in the rate of stopping treatment between the more- and less-intensive treatment groups in the 3 trials that reported this outcome.14,17,18

Most guidelines suggest that blood pressure should be lowered to below 130/80 mm Hg in all patients with chronic kidney disease.8,9,30 Our meta-analysis of 11 trials involving more than 9000 participants, among whom more than 1200 kidney failure events were recorded, has shown that intensive blood pressure control with a lower target reduced the risk of kidney failure. However, the heterogeneity we saw based on markers of study quality raises the possibility that this benefit is overestimated.

The results from individual trials were inconsistent, even among trials with the same target blood pressure, highlighting the value of meta-analysis in improving precision and providing an opportunity to identify important risk modifiers with increased statistical power.12,13,17,26 Our results suggest clinical heterogeneity in the study population may explain the variable results across these trials, because proteinuria was found to be a clear effect modifier.

A key strength of our review is its inclusion of long-term follow-up data from a number of trials with large numbers of end-stage kidney disease events, thus providing substantial statistical power to detect plausible benefits. Kidney function generally declines relatively slowly, highlighting the importance of long-term follow-up to obtain adequate power to show clinically important benefits. Our meta-analysis includes 2 trials involving patients at high risk for end-stage kidney disease with more than 10 years of follow-up,17,34 in addition to the ESCAPE study with 5 years of follow-up.18 It will be critically important for any new trials assessing interventions aiming to prevent end-stage kidney disease to include participants at high risk for this outcome and to follow them for an appropriate period of time to clearly define the presence or absence of any benefits.

Our review was also limited by the varied quality of the included trials and the inability to use a double-blinded study design for a trial of blood pressure targets, raising the risk of differential use of other treatments. In addition, the heterogeneity we saw according to markers of study quality limits the strength of the conclusions that can be drawn. Furthermore, the number of included trials is small, which limited subgroup analysis, and the various definitions used for blood pressure targets made meaningful subgroup analyses by different target levels impossible. Finally, because adverse events were inconsistently reported, safety remains an area of uncertainty.

We did not find any evidence of benefit from intensive blood pressure lowering on cardiovascular events or death. Cardiovascular outcomes were not reported in all of the trials, and the total numbers of events identified were modest, suggesting that this may be an issue of power. Reviews of different blood pressure–lowering targets in the general population have suggested that overall cardiovascular benefit is achieved with lower blood pressure targets36 and have refuted concerns derived from observational studies that lower targets in the commonly observed range may lead to increases in the risk of coronary artery disease.

The available data suggest that intensive blood pressure lowering prevents end-stage kidney disease in patients with chronic kidney disease, particularly in the presence of proteinuria. However, the effects remain to be shown in people with normal urinary protein excretion. Our data provide support for current guidelines that suggest lowering blood pressure targets in people with proteinuric chronic kidney disease and highlight the potential value of this approach. More data are required to determine the effect of such a strategy in patients who do not have proteinuria. 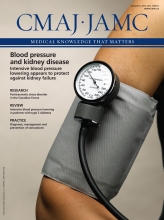