Overestimation of risk ratios by odds ratios in trials and cohort studies: alternatives to logistic regression

Logistic regression analysis, which estimates odds ratios, is often used to adjust for covariables in cohort studies and randomized controlled trials (RCTs) that study a dichotomous outcome. In case–control studies, the odds ratio is the appropriate effect estimate, and the odds ratio can sometimes be interpreted as a risk ratio or rate ratio depending on the sampling method.1–4 However, in cohort studies and RCTs, odds ratios are often interpreted as risk ratios. This is problematic because an odds ratio always overestimates the risk ratio, and this overestimation becomes larger with increasing incidence of the outcome.5 There are alternatives for logistic regression to obtain adjusted risk ratios, for example, the approximate adjustment method proposed by Zhang and Yu5 and regression models that directly estimate risk ratios (also called “relative risk regression”).6–9 Some of these methods have been compared in simulation studies.7,9 The method by Zhang and Yu has been strongly criticized,7,10 but regression models that directly estimate risk ratios are rarely applied in practice.

In this paper, we illustrate the difference between risk ratios and odds ratios using clinical examples, and describe the magnitude of the problem in the literature. We also review methods to obtain adjusted risk ratios and evaluate these methods by means of simulations. We conclude with practical details on these methods and recommendations on their application.

Misuse of odds ratios in cohort studies and RCTs

Frequency of this problem in the literature

We found eight methods to estimate adjusted risk ratios in the literature (Table 3 5,7–9,14–19). The Mantel–Haenszel risk ratio method is straightforward and gives a weighted risk ratio over strata of covariables.14,15 This method is only practicable if adjusting for a small number of categorical covariables (i.e., continuous covariables first need to be categorized). Log–binomial and Poisson regression are generalized linear models that directly estimate risk ratios.7,8 The default standard errors obtained by Poisson regression are typically too large; therefore, calculation of robust standard errors for Poisson regression may be needed to obtain a correct confidence interval around the risk ratio.9 The other four methods use odds ratios or logistic regression to estimate risk ratios. The Zhang and Yu method is a simple formula that calculates the risk ratio based on the odds ratio and the incidence of the outcome in the unexposed group.5 The doubling-of-cases method concerns changing the data set in such a way that logistic regression yields a risk ratio instead of an odds ratio.17 Again, calculation of robust standard errors may be needed to obtain a correct confidence interval around the risk ratio.18 Lastly, the method proposed by Austin uses the predicted probabilities obtained from a logistic regression model to estimate risk ratios.19 A recent review article of methods to estimate risk ratios and risk differences in cohort studies illustrated several of these eight methods using empirical data.20

We conducted a simulation study to evaluate which of these eight methods performed best with regard to estimating the correct risk ratio and confidence interval. We also compared the estimated risk ratios with the odds ratio obtained with logistic regression. Details of the methods and results of the simulations are described in Appendix 1, available at www.cmaj.ca/lookup/suppl/doi:10.1503/cmaj.101715/-/DC1. In this section, we summarize the main findings of the simulations in a simple situation (dichotomous determinant and outcome, and one continuous confounder) (Figures 1 and 2 in Appendix 1). Results for more complex situations (multiple dichotomous or continuous confounders) were essentially the same.

Log–binomial regression, Poisson regression with robust standard errors, and the doubling-of-cases method with robust standard errors all yielded correct risk ratios and confidence intervals in all situations of our simulations. However, all of these methods have potential disadvantages with particular data sets that could force the investigator to discard some methods and prefer another method, according to the data at hand. A disadvantage of log–binomial regression is that the model does not converge in certain situations (i.e., the model cannot find a solution and therefore the risk ratio cannot be calculated). These convergence problems mainly come up if several continuous covariates are included in the model and if the incidence of the outcome is high. Poisson regression with robust standard errors does not have this problem but has the disadvantage that the model may yield individual predicted probabilities above 1. Probabilities above 1 are not a problem if the only interest is in obtaining a valid risk ratio. If the interest is also in the individual predicted probabilities of disease, for example in prognostic or diagnostic research, probabilities above 1 may be problematic. A disadvantage of the doubling-of-cases method with robust standard errors, which has neither of these problems, is that it requires some manipulation of data before the analyses can be performed. Furthermore, the calculation of the robust standard error in the doubling-of-cases approach is not available in standard statistical software packages and demands expertise to program.

We showed in the clinical examples and simulations that an odds ratio can substantially overestimate the risk ratio. In fact, both are correct, but when an odds ratio is interpreted as a risk ratio, serious misinterpretation with potential consequences for treatment decisions and policy-making can occur, as illustrated by the two clinical examples. Therefore, any misinterpretation of odds ratios should be avoided with calculation and presentation of adjusted risk ratios in both cohort studies and RCTs. Also, if adjustment for baseline covariates is not done, which is often the case in RCTs, the risk ratio is the preferred measure of association in case of dichotomous outcomes.21 Note that in case–control studies, the odds ratio is the appropriate effect estimate and the odds ratio can be interpreted as a risk ratio or rate ratio depending on the sampling method.1–4 Of course, if data of cohort studies or RCTs are collected so that a time-dependent analysis is possible, Cox regression yielding hazard ratios is recommended because it estimates relative hazards and does not involve problems related to odds ratios.

There are several valid methods to estimate adjusted risk ratios. In a situation with only one or two categorical covariables, for example, to take into account stratified randomization in an RCT (example 2), we recommend use of the simple Mantel–Haenszel risk ratio method. This method can be easily applied by using Rothman’s spreadsheet Episheet (can be downloaded from http://krothman.byethost2.com/). In a situation with more covariables or continuous covariables, we recommend use of log–binomial regression. If log–binomial regression does not converge, Poisson regression with robust standard errors can be applied. Both methods are easy to perform in standard statistical software packages, including SAS, Stata, R and SPSS22,23 (see Appendix 2, available at www.cmaj.ca/lookup/suppl/doi:10.1503/cmaj.101715/-/DC1, for codes). If the Poisson method is in turn problematic because individual probabilities have to be estimated and those estimates become larger than 1 for some individuals, there may be no other solution than the doubling-of-cases method with robust standard error estimation, but this needs extra programming and statistical expertise. In line with other commentators,7,10 we discourage the use of the Zhang and Yu method, despite its ease of application and its appealing conceptual simplicity.

In this paper we have shown the problems of using odds ratios as an approximation of risk ratios in cohort studies and RCTs. Researchers, reviewers and journal editors should be aware of potential misinterpretation of odds ratios, especially when the incidence of the outcome is large. The problem often arises when researchers use logistic regression to adjust for potential confounders. Misinterpretation of odds ratios should be avoided by calculating adjusted risk ratios. Journal editors and statistical reviewers can play an important role in encouraging researchers to present risk ratios instead of odds ratios in cohort studies and RCTs. 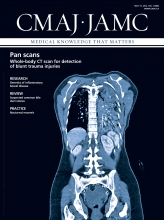