Re-rethinking the article by Thombs and colleagues

We take issue with all four key reasons given by Thombs and colleagues1 to advise against routine screening for depression.

Third, there is no evidence that screening benefits patients. Carlson and colleagues3 conducted a randomized controlled trial in which screened patients had better emotional outcomes than non-screened patients. Interestingly, one of the authors advising against screening in the CMAJ article1 also attempted to negate the positive outcomes of the Carlson and colleagues3 study in a letter to the editor.4 Furthermore, Thombs and colleagues consider only improved patient outcomes as a justification for screening, and they ignore the social justice of equal access to care and that routine screening allows for databased resource allocation.

Last, why focus only on screening for depression when there other treatable types of distress, like anxiety or symptom burden, that affect patients’ quality of life? 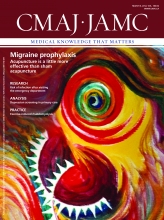